About 20 minutes from the Bhilai Steel Plant, one can find the Maitri Bagh or the ‘Garden of Frienship’ built to commemorate the friendship between Indian and the Russian Government. This garden has been built and managed by the Bhilai Steel Plant. It is considered to one of the best hangout spots in the state of Chhattisgarh, enjoyed by people of all ages. It consists of a large zoo, beautiful lakes, gardens, musical fountain, a tall tower called the Pragati Minar, a toy train called ‘Maitri Express’ for the children. It is thus an amazing picnic spot, a must – visit with your family and friends. The lush greenery, shimmering musical fountain, flower beds and scenic locales attract tourists from far and wide. Adjacent to the garden, is Bhilai Water Works, providing water to the township. 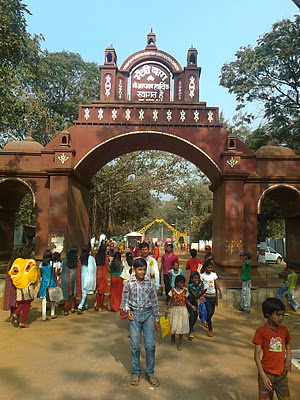 The entrance of Maitri Bagh is marked by two artificial giraffes, colliding their heads with each other. The Maitri Bagh Zoo in Bhilai is the largest of its kind in the state of Chhattisgarh. Spread over an area of about 167 acres, the zoo is home to a large species of flora as well as fauna. The zoo has about 39 exotic species of animals, birds and reptiles, including many endangered species. White tigers are a special favourite, among the tourists, especially among the children. An artificial lake flows through the zoo, where you can go for boating and enjoy the scenic splendour.

A toy train called the Maitri Express is operated in the zoo from 3.00 pm to 6.00 pm. The price of a ticket is Rs.5, however, it is free for children below three. There is a musical fountain on an island in the artificial lake. It is the biggest of its kind in south East Asia. The Fountain consists of many fountains of water dancing on instrumental music on some retro and contemporary songs. The jets of water shoot out in the air, twist and sway in the air, appearing as if dancing to the tune of the music. Each of these movements is lit up by shimmering and bright colours, providing a visual treat to the viewers. The programme lasts for about 20 minutes, and 2 shows are organised in the evenings, on alternate days. This dynamic spectacle attracts people of all ages, from far and wide, leaving them wanting more.

The fresh and unpolluted air, lush green surroundings, filled with blooming flowers make the garden an ideal spot for taking strolls and jogging in the evening. It also has a playground equipped with swings, giant wheel and other fun activities for the children. There is a tall watchtower in the garden, called Pragati Minar, from whose top you can get a breathtaking view of the Maitri Bagh and the adjoining Bhilai Steel Plant. 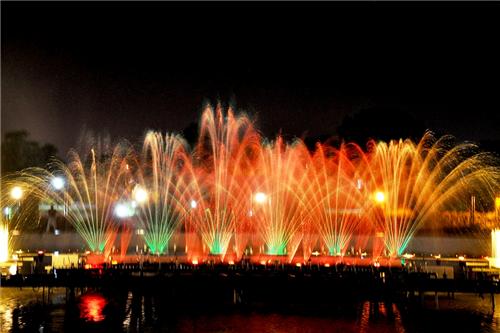 Another special feature of the Maitri Bagh is its annual Flower Show. Every year a Flower show is organised in the Bagh, in a grand manner, with active participation from the locals as well as the tourists. Many kinds of huge flowers and vegetables are displayed that are brought from various part of the district.

Maitri Bagh thus has a variety of activities to keep you engaged for an entire day. You could spend the morning, lazing around the garden, and indulge in fun activities like the swing and the giant wheel. Afternoon can be spent in the zoo, watching the exotic avian and animal species. In the evening, you could go for boating amidst the serene splendour of the lake. You can conclude your day by watching the spectacular musical fountain and return home with fond memories.

The zoo is open from 10 am to 5 pm, while the park is open till 7.30 pm. The musical fountain operates at 7 pm on Saturday and Sunday. The entrance fee is Rs. 10. The zoo and park remain closed on Mondays.