The Bhilai Steel Plant, an undertaking of Steel Authority of India (SAIL) was established with a view to lay the infrastructure for rapid industrialization leading to economic self-reliance of the country. It was based on Nehru’s vision for modern India stating that, ‘Economic emancipation could come only through rapid industrialization, especially with the adoption of modern technology.’ The Bhilai Steel Plant was thus viewed as an instrument of change for economic progress of the country.

History behind the founding of Bhilai Steel Plant

The Bhilai Steel Plant, a symbol of Indo- Soviet collaboration, built during India’s Second Five-Year Plan is one of the first integrated Steel Plants set up on India to promote industrial development. The history of Bhilai is linked to the history of Bhilai Steel Plant, as it has a prominent role to play in the transformation of the remote Bhilai village to the industrial hub of Chhattisgarh. Thus the steel plant can be rightly called as the identity of Bhilai city. 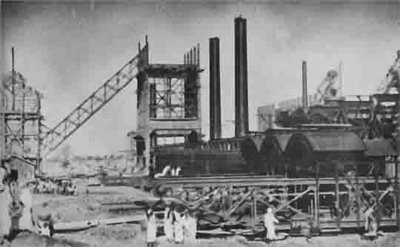 The Steel Plant was inaugurated by Dr Rajendra Prasad, the then President of India in 1959. To make way for the plant, the Government purchased land from the adjoining 96 villages. The chief objective of the setting up the plant was to provide employment to the locals. However the reluctance of the locals to participate in its proceedings along with the plant’s requirement of experienced and skilful workers gave rise to the recruitment of outsiders on a large scale. This influx of outsiders gave rise to a cosmopolitan culture in Bhilai and led to the development of the steel city near the industrial complex equipped with various facilities.

As Bhilai Steel Plant started making huge profits, the locals came to realise their folly and this gave rise to friction among the locals and the outsiders. However, the arrival of new subsidiary industries and companies generated huge employment opportunities for the locals in the region, thus resolving the tension between them.

Bhilai steel plant is one of the largest steel plants in India. Constructed with the objective of providing employment to the rural locals, this plant presently has about 55,000 employees, many of them working in nearby mines and subsidiary industries. It procures its raw materials like iron ore, dolomite, manganese from nearby mines that are connected to the plant by specially built rail lines. Its products include rails, heavy steel plates, structural, longest rail tracks, rods, construction materials, railway sleepers and other steel products. Bhilai Steel Plant is the only steel plant in Station, India continuing with “Ingot Casting & Soaking Pit with Blooming Mill” route for steel making. Various steps like continuous monitoring and inspection, chemical analysis, dimensional and surface check, training, quality assurance etc are undertaken to ensure that the products meet the required specifications. 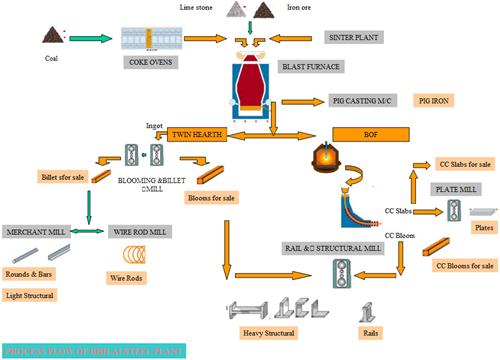 The Bhilai Steel Plant is a famous centre for technical tourism and visitor passes for the same are issued by the P.R.O Department. The main places in the Steel Plant to be visited include coke oven battery, blast furnace, rail & structure mill, plate mill, wire rod mill, telecommunication department etc. Plans and proposals are in various stages of development for the expansion and modernization programme of the massive steel plant. Some of these projects include new coke oven battery, new steel melting shop, new sinter machine, additional blast furnace, new compressed air station, oxygen plant and many more. These projects emphasise on acquiring environment- friendly, energy- efficient facilities, improving the capacities and adding new dimensions to the Bhilai Steel Plant’s capabilities.

Apart from the production, various other activities are being undertaken by the Steel Plant. This includes a tree-plantation drive over a period of years, causing the mines and surrounding areas to be covered with greenery. In addition, a number of gardens including the Maitri Bagh, maintained by the Steel Plant add to the charm of the city. The plant has a Town Administration Department that deals with functions like cleanliness, maintenance, street- lighting of the roads etc. There are about 10 health centres, 5 hospitals including those in the mines, a national occupational health & service centre, a main medical post, a cancer hospital, a college of nursing, all run by the Bhilai Steel Plant. Through its Peripheral Development Programme, it aims in betterment of infrastructure, literacy programmes and community health programmes including construction and installation of hand pumps, bridges, approach roads, health and veterinary camps etc. 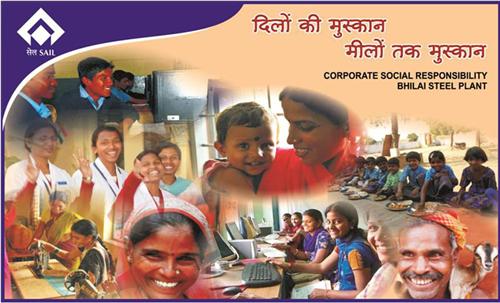 The CSR Department has identified about 21 villages as model steel villages, where a number of sustainable activities like empowerment of women under the Swyamsiddha or self-employment project, providing basic infrastructure, education activities are being undertaken. Bhilai Ispat Vikas Vidyalaya and Ispat Kalyan Chikitsalaya in the township and its adjoining areas have been set up for the rural and backward communities of the region. It has also adopted over 100 tribal children and provides various facilities like residential education, accommodation, meals etc. Various sports and cultural events are also organised on a large scale, for the benefit and entertainment of the people.

Bhilai Steel Plant has won many accreditations and awards for its achievements in diverse fields. The awards are in recognition of the international standards of efficiency, quality and economy in its operations and various other parameters including leadership, resource management, process management, implementation of modern IT-driven business and knowledge tools etc. 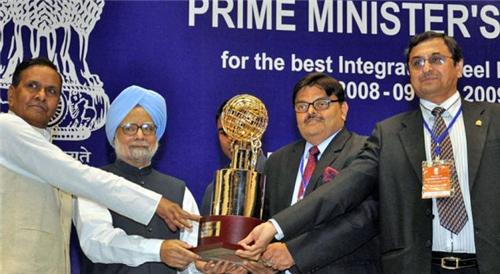 Thus the Bhilai Steel Plant today, stands tall and proud as a symbol of India’s technological progress. It is thus a realization of Pandit Nehru’s dream and has become imbedded in the national consciousness as a significant symbol of a new age in India.


Explore more about Business and Economy of Bhilai