The city of Bhilai presently, an industrial, commercial and educational hub is one of the rapidly developing cities in the country. It was once an unknown cluster of about 15 remote villages – Sonth, Boria, Hingna, Khursipar, Purnea, Maroda, Joratarai, Kotrabhata, Newai, Dundera, Kosa, Nawagaon, Bawali, Ruwabandha, Amdi, with only paddy fields and ponds. These villages were unified and the city of Bhilai came into existence in 1955, after the establishment of Bhilai Steel plant, following an agreement between the Indian Government and USSR. Since then, the progress made by the city of Bhilai has been tremendous. 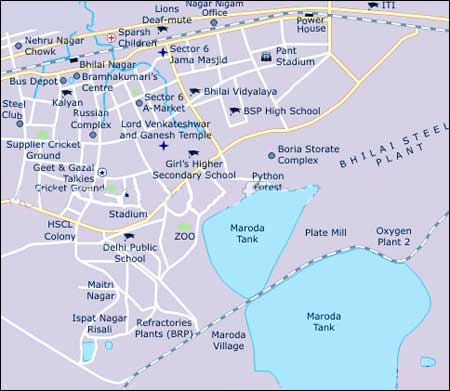 The present day Bhilai in Chhattisgarh comprises of about 10 sectors including Risali, Jounwani, Maroda, Ruwabandha, Khursipar etc and various other important areas. Each sector is equipped with a variety of facilities including community halls, educational institutes, healthcare centres and dispensaries, market places etc. Home to one of the biggest steel plants in India, Bhilai has earned the status of being one of the best planned townships in India. The Bhilai Municipal Corporation called the Bhilai Nagar Nigam looks after the administration of the city.

The Bhilai Nagar Nigam came into existence on 8th June 1998. It has played an important role in the development of this city. The city has been divided into 67 wards, out of which 44 are under the purview of Nagar Nigam, while the remaining 23 are managed by the Ispat Steel Plant. The duties of the Nagar Nigam involve water supply, sanitation, roads, hospitals, waste management, birth and death records, civic amenities, electricity, healthcare services, tax etc. The mayor heads the Nagar Nigam, while the commissioner is its official incharge. For the purpose of administrative convenience, the city has been divided into 6 zones and an administrative officer has been appointed for each of the zones, to after its administration and progress.

Bhilai which is part of Durg district is administered by District Collector. The Collector is entrusted with a number of powers as well as responsibilities. He is responsible for local administration and maintenance of law and order. He is assisted by additional collectors and various officials who help him fulfil his duties and responsibilities. Some of the primary duties of collector involve:
Collector, Durg
Shri Brajesh Chandra Mishra
Phone No: 0788-2322005
Fax: 0788-2322005

For the effective governance of the city, the following 15 departments have been set up. The officers incharge look after their respective departments, carry out various developmental programmes, address public grievances and ensure the smooth functioning of the city.

The Police force in Bhilai have various responsibilities including enforcement of law and order, prevention of criminal activities, surveillance, counter – terrorism etc. The Superintendent of Police heads the police force in the Durg district. He is assisted by an able and vigilant team of police officers whose primary concern is maintenance of law and order in the city and ensuring the safety and security of the locals as well as the visitors.